On the morning of May 18, 1897 Bram Stoker staged a dramatic reading of his soon-to-be-published vampire novel. Since it still wasn’t certain which title the publisher was going to use, Bram entitled his reading, Dracula or the Un-Dead. Bram Stoker preferred The Un-Dead but the publisher wasn't so keen on the word 'dead' in the title. Bram hastily prepared the script for his dramatic reading using proof copies of the novel's text. He altered the text for the stage and made changes that would meet Lord Chamberlain’s requirements. As the royal censor, Lord Chamberlain could order an offending word, line or scene stricken from a script, or could even ban a play completely by refusing to license it for performance. The dramatic reading script did not have time for a polish or edit and using 15 actors from the Henry Irving company, Bram Stoker staged a one-time performance that lasted over four hours. Eight days later, the novel Dracula was published. Though not a commercial success in Bram Stoker's lifetime it has become the highest selling fiction novel in the world and has never been out of print.


Over the years I have directed various ‘Dracula’ projects including a Dracula short with Mickey Rooney narrating as Van Helsing and in 1997, the centennial year of Bram Stoker’s Dracula, I re-adapted and re-staged a (shorter) dramatic reading in the style that Bram had done 100 years earlier, using actors in costumes and this time adding live music for underscoring. For publicity I spread a rumour that Bram Stoker had re-staged his reading of Dracula here in Toronto while managing Henry Irving's North American tour.  There is no evidence that Bram had ever staged a second reading of Dracula.


Years went by and I found myself working on Dracula the Un-Dead, the official sequel to Bram Stoker's novel. 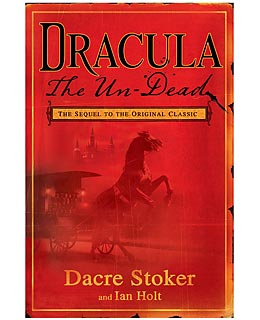 Penguin Canada wanted to have a big event for the book launch here in Toronto, and wanted to do some sort of dramatic reading.  Dacre Stoker (great-grandnephew of Bram) suggested they get a hold of me since I had recreated Bram's in 1997. When I met with the publicist from Penguin, she told me that they had heard a rumour that Bram had re-staged his public dramatic reading in Toronto and that's how they got the idea.  Oh... the irony...
I suggested using the Bathurst Street Theatre in Toronto. Since it had been built in 1888 as a church, it had the right ambiance for the new gothic story.  The one night performance would take place just before Halloween on October 28, 2009.


We wanted to make this a spectacular event for a modern audience. Having learned from my previous reading that the audience had trouble feeling for the death of a character when they could still see the actress drinking bottled water right in front of them on the stage (as is normally done in dramatic readings), I decided we were going to have entrances and exits.  Using my experience of mixing projections with live productions we used a  new effect called a Fogscreen, which literally created a curtain of fog using ionized water particles to project onto.  The result was amazing. Even when projecting a newspaper headline it could be clearly read on the fog.  Actors were able to enter through the fog with minimal image displacement and without getting their costumes wet either.

The period costumes were provided by award-winning costume designer Alex Amini, whom I've worked with many times on several of my stage and film productions. Eighteen incredible actors were used to bring Dracula The Un-Dead to life, some had been involved with my 1997 Dracula reading (ie. Carmen Gillespie, who played Mina Harker in both and like her character in Un-Dead, had not aged in that time).  The whole performance was underscored by haunting live music composed by Kieren MacMillan. Dacre Stoker and Ian Holt were there in person and acted as narrators.
The result was a magical night. We had only sold 18 advance tickets but on the night of the performance approximately 500 eager people showed up.  The performance ended on a cliffhanger moment with a 'To be continued... in the novel' projected, which resulted in a huge line-up to buy copies to have them signed. All in all a very successful evening.  Our full house became the largest book signing and sales event for Dracula the Un-Dead's publicity tour.

Click here to see 1-minute video from the reading showcasing the Fogscreen:


To view photo stills from that night visit:

-------
My novel Depth of Deception (A Titanic Murder Mystery) can now be purchased at an introductory rate of $0.99 from Amazon at http://www.amazon.com/dp/B007O3IKTY as well as print and other e-book formats from http://www.depthofdeception.com

Posted by Alexander Galant at 18:39