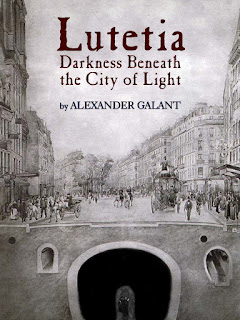 Chapter I
A low, ominous tone quavered from the Notre Dame Cathedral and echoed along the Seine River. Before the lonely chime faded away into the Parisian night, it was soon followed by another peal in the same sombre pitch. It was the solitary bell in the south tower, calling to its sister bells to join it in song. But they had been taken down and melted into cannons only a few decades earlier, sacrifices for the French Revolution. The bell known as Emmanuel rang out a third time. Its echo lingered in the air, waiting for a response that would never come.

Adeline lay quietly in the darkness of her room, counting the chimes from the Notre Dame. Three o'clock in the morning. Hopefully, the baby was sleeping by now. At three months old, the boy had a habit of awakening several times in the night, but presently seemed to be quiet. Adeline strained to listen for any sounds but could only hear her own breath as she gathered her nerve.

Posted by Alexander Galant at 13:37