Historical Research for the staging of The Diary of Anne Frank

As I was looking through my back-up files for old reference photos I found the folder containing stills from a stage production of The Diary of Anne Frank that I directed in 2004.

It's a clear example of my need for being historically accurate not only in my writing but in the shows I have worked on. During this production I not only had historical books and photos, but also a computer simulation of the Anne Frank House in Amsterdam. It allowed our actors to virtually 'walk' through the Secret Annex. I designed the set to be as close as possible to the real annex where Anne Frank and her family hid for two years. 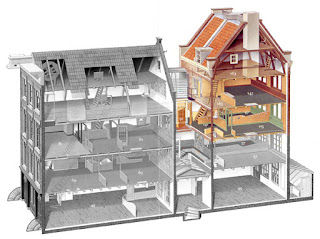 Here are some of comparison photos of the Anne Frank House and our multi-level set.

Anne's real room (left) was duplicated in our set (right). For lighting reasons we didn't cover the windows with the tissue paper.

The pictures on the wall were duplicates of the pictures that are still currently hanging in her room. Even a similar desk lamp was found for our set.

The Main Room
On the left is the real common room for the eight people in hiding. On the right was our set. The door visible leads to Peter's room - which was also the access to the attic. Such was the case with our set as well.

The main room had been a laboratory, which is why the sink was so odd. It's a small attention to detail but a few audience patrons who had been to the real Anne Frank house did notice this.

Opekta was the brand of pectin that Otto Frank's company manufactured.  A year before going into hiding, Otto began stocking the attic with their belongings and supplies.
At the top of the show, the set had some replicas scattered around. 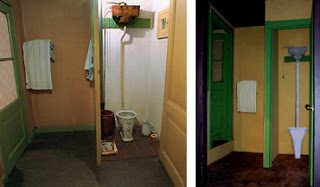 On the left is the real Water Closet (washroom) from the Anne Frank House.

The visible green door led to Anne's room. Likewise, our set had the W/C in the exact same layout.

For a publicity still we recreated a famous photo of the real Anne Frank, taken before she went into hiding. 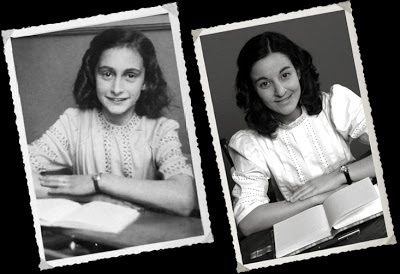 The talented actress (Jennifer Waiser) who portrayed our Anne Frank was dressed in a replica costume. Note the trim in the blouse and the wrist watch as well.

There were other tiny historical details that I can't show here ie. recreating the exact chimes of the Westertoren bells which were melted down during World War II. Many such details were never really noticed, but it helped to authentically recreate a dark chapter of our human history. This stage production with an amazing cast of actors was seen by hundreds of school children, in hopes that they learn from history, never forget and never repeat it.

Review of The Diary of Anne Frank from TorontoStage .com

Posted by Alexander Galant at 00:06