My creative way to combat cellphones in theatres 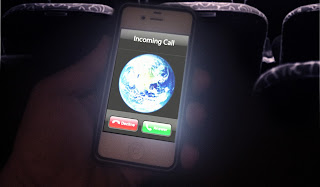 A spotlight has been placed on theatre goers with cellphones.

In recent news we’ve heard of Patti LuPone snatching a rude patron’s phone in the middle of a performance at the Lincoln Centre, how another man jumped onto the stage of Hand to God to charge his phone and about someone texting throughout a performance of Hamilton on Broadway.

I often go to the theatre and am amazed at how many people check their phones during a performance. The sudden burst of light in a dark theatre is invasive, and also puts a tiny screen-sized spotlight on the face of the person who clearly ignored the announcement to please turn off all electronic devices. Or perhaps our minds have simply grown accustomed to blocking out the sound of a loud-speaker announcement, like not paying attention to a ‘price check’ at a grocery store. Why the uproar?

Let’s begin by examining why people go to live theatre. I think the greatest appeal is that it is ‘live’. It all unfolds in front of you. The actors and action are only a few feet away from the ‘real world’ and there is something special about being directly present. Why else would you spend more money than a movie ticket? Unlike a movie, this performance is unique. Every nuance, laugh, subtle gesture, ad-lib and mistake are witnessed only by this group of people. There’s a special energy in a live theatre. Actors feed off that energy. They crave the applause. They feel elated when they succeed at making an audience laugh or cry or wait in silent anticipation for something to be revealed. There is a certain satisfaction when they know they’ve drawn the audience completely into their world. Can you imagine, in one of those moments, in the middle of a carefully crafted scene, the medieval heroine moves towards a hidden danger when suddenly - -

The illusion is shattered and the magic is gone. All the actor’s work is dashed as the audience is jarred out of the world on stage and back to a world where rude people answer their phones during a show.

Having noticed these interruptions several years ago, when I started directing theatre, I started creating pre-show scenes in the vein of the show the audience was about to see. The house lights dim, which brings the audience’s full attention to the stage, then I present my “announcement”. It’s usually done with humour so the audience willingly complies.

It all started with a stage version of 12 Angry Men (re-entitled Twelve Angry People to accommodate some updates). The character of the Guard only has three lines in the show, so I had the actor come out before the show started and address the audience, welcoming them to ‘jury selection’. While waiting for the ‘lawyers to arrive,’ the Guard went over the rules of the space, which included having no contact with the outside world.

For The Wizard of Oz, the actor who played Professor Marvel /The Wizard came out and did some magic tricks and fortune telling, before asking everyone else to turn their little magical boxes off.

For A Christmas Carol, characters from another Dickens story warned the audience that personal belongings that were in-hand might get stolen, along with their watches and handkerchiefs.

Before Les Misérables, two guards welcomed the audience to Toulon Prison, where punishment for obstinance was severe.

It’s become a bit of a personal trademark to have a creative pre-show announcement. Here are clips of some others for you to enjoy:

From a production of Singin’ In The Rain.


Since I had to create silent films and early ‘talkie’ films for the actual stage production, I took it a step further and created this silent film which explains the ‘no cellphone rule’ in a 1927 context.

The War Show is a play with music, following six Canadian soldiers through World War II.


Authentic newsreel footage from the era was projected throughout the performance, so we shot this parody of Judy Garland and Gene Kelly’s number, “For Me And My Gal”.

For the dramatic reading of the novel, “Dracula the Un-Dead” which I adapted for stage for the Toronto Book Launch with Penguin Books.


Here, our actor reads a preview of a fictitious book entitled, “Theatre of Blood”.

These bits seemed to work well, as we did not have any problems with cellphones or disruptive patrons during those performances. The only show for which I did not create a pre-show scene was The Diary of Anne Frank in 2004, because I couldn’t figure out a way of being humourous about this issue in a way that wouldn’t be perceived to be in bad taste. Unfortunately, despite the usual announcement, there was a plague of cellphones going off, often at dramatic or poignant moments. Ever since then, I have made a great effort to grasp the audience’s attention before the show begins.

Recently, I was happy to read in the New York Times article, “Theatres Struggle With Patrons’ Phone Use DuringShows” that some theatres have added a personal pre-show touch, such as The River’s understudy stepping onto the stage before the show, personally imploring the audience to turn off their devices.


Perhaps we can all squash these small-screen interruptions with a bit of personally-added entertainment. Have you been inspired? Feel free to contact me. I’m interested to hear what you create.
Posted by Alexander Galant at 10:57