Write a novel in three days?

So, to answer my original question: Can I write a novel in three days?  Yes. It may not be perfect but it was proof of what I can accomplish when I put my mind to it.
To anyone else wanting to challenge themselves in writing a novel in three days, I highly recommend the experience.  For more information on the 3-Day Novel Contest visit: http://www.3daynovel.com

----
My novel Depth of Deception (A Titanic Murder Mystery) can now be purchased at an introductory rate of $0.99 from Amazon at http://www.amazon.com/dp/B007O3IKTY as well as in other e-book formats from Smashwords at https://www.smashwords.com/books/view/144531.

Posted by Alexander Galant at 19:20 2 comments:

Review for my Star Wars spoof


A favorable review of my short film, Star Wars: Blasted Behavior, for the screening at DragonCon in Atlanta tomorrow. 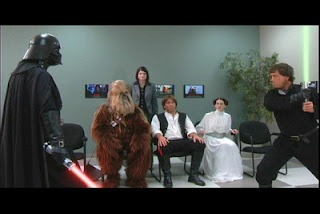 Posted by Alexander Galant at 01:11 No comments: