Judging a book by its cover. 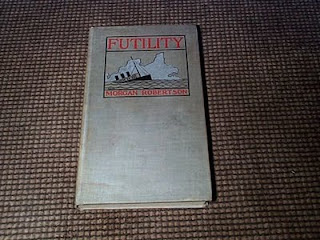 You know the old saying, 'You can't judge a book by its cover."  Well, let's test that out.  Looking at the cover in the above photo, can you figure out what the book is about?  There is a very large iceberg and the image of a familiar ocean liner sinking into the water.


If you guessed the book, Futility, is about the infamous ill-fated ship, RMS Titanic - you would be wrong!


In fact, this book cover was designed and published in 1898 -  fourteen years before the Titanic set sail. But the irony doesn't stop there.  The ship in the above novel was called: Titan.


Both the fictional Titan and the real Titanic had many striking similarities: both were considered to be 'unsinkable', both were over 800ft long, both were moving too quickly (Titan: 25 knots, Titanic: 22.5 knots) on a cold April night, both hit an iceberg on the starboard side, both sank 400 miles off the coast of Newfoundland and neither of them had enough lifeboats for their 3000 passengers and therefore both had a tremendous loss of life.


It is one of the strangest cases of life imitating art. After the sinking of the Titanic in 1912, the novel Futility was re-printed with an extended title, Futility or the Wreck of the Titan.   The publishers wanted it in the title to capitalize on the recent sinking of the Titanic. It has had the extended title ever since, which is what makes this original 1898 edition so rare.   This one pictured above is not mine, but it is for sale at about £10,000 ($15,574.01 USD).  It is in tremendous condition for a 114 year old book.  If anyone is seriously interested, I can give you the contact information of the private seller, who seems like a very nice guy.

The book Futility becomes an important clue in my historical-thriller novel, The Depth of Deception (A Titanic Murder Mystery).